Tags: Serengeti, Tanzania, International Programme on the State of the Ocean 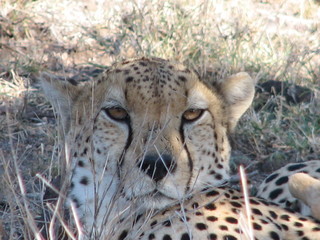 Apologies for the prolonged absence: We were off chuntering about biodiversity in foreign lands and what not. But now we’re back, and there’s lots to catch up on:

*Some good news from the Serengeti! After a recent visit from US Secretary of State Hillary Clinton, Tanzania announced that it would give up plans to build a road across the Serengeti. But the group that sounded the alarm, Serengeti Watch, approaches the news with caution: “Our interpretation - A battle has been won, but the struggle to save the Serengeti goes on. Roads will still be constructed up to the edges of the park. The pressures on the Serengeti, including a commercial corridor to Uganda, still exist. The highway across the Serengeti has been proposed three times now, and can be raised again. But yes, let’s congratulate ourselves on the work we’ve done.“ *Terrifying news from the IUCN Red List: More than 19,000 species are heading to extinction, according to the latest data. That’s up from 11,000 a decade ago. The Economist lays it out. *Ocean ecosystems continue their precipitous slide, according to the latest report from the International Programme on the State of the Ocean, citing a “deadly trio of factors”: warming, acidification, and anoxia (low oxygen levels). Videos here. *Al Gore takes the lazy-ass media and the Obama administration to the woodshed re inaction on climate change in the latest issue of Rolling Stone. I’m getting emails every week now from Barack, asking me to donate $375 for a chance to have dinner with him and from Michelle, trying to sell me t-shirts. Hey guys, I still love you, but I don’t want dinner, and I don’t want a t-shirt. I’m with Al: I want you to get on it.