What If Rhinos Were No More? 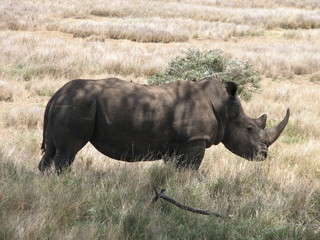 I got a really interesting question from a Facebook friend and fellow rhino-lover in Amsterdam. She writes: “What would be the impact on the world ecologically if a complete species like the rhino were to go extinct?”

My mind immediately leapt to the fascinating phenomenon of rhino latrines. Rhinos don’t poop just any old place: They establish latrines and visit them regularly, marking territory but also dispersing seeds and boosting their germination. WWF’s chief scientist, Eric Dinerstein, calls rhinos “landscape architects” in his book, The Return of the Unicorns: The Natural History and Conservation of the Greater One-Horned Rhinoceros. In Nepal, he looked at the role played by the endangered greater one-horned rhinoceros and found that rhinos both eat and beget fruit at an astonishing rate: “Few contemporary frugivores can match rhinos in the quantity of seed-rich manure.” He calculated it would take around 2,000 defecating Jamaican fruit bats, well-studied strewers of seeds, to equal ten percent of what a single rhino ingests and passes through its prodigious tummy per day. Old rhino latrines create thickets of trees in the Asian grasslands that are still lucky enough to hold this endangered beast.

Likewise, Africa’s black and white rhinos have been called “megaherbivores” or “megagardeners.” Along with elephants, they alter the composition of grasslands and savannah forests through their activities. So their extinction would impoverish every landscape they inhabit.